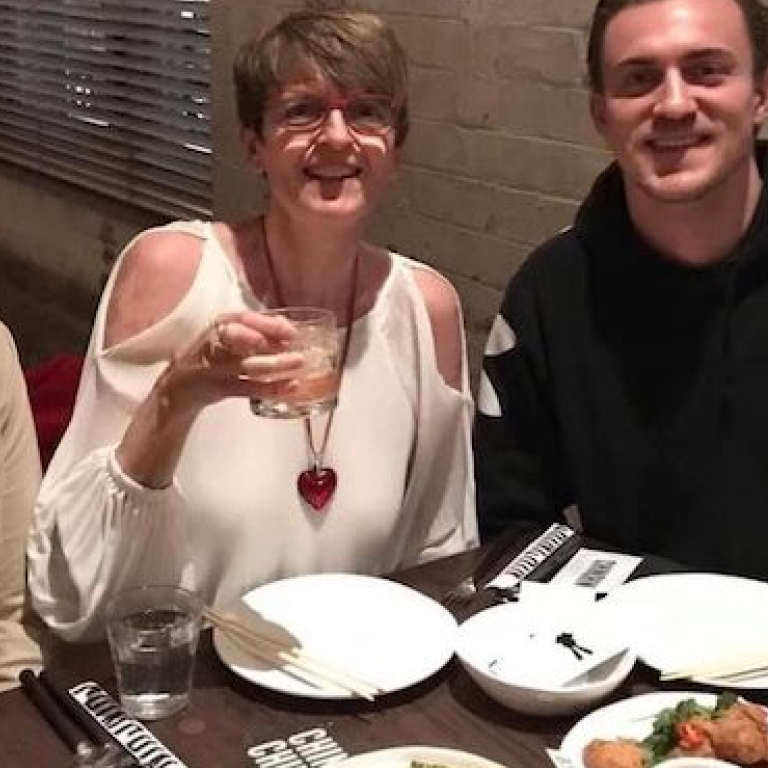 Tell us a little about yourself

I grew up on the beach in Coogee and the ocean feeds my soul. I’ve always been a water baby and spent a lot of my life in, on or by the water. I’m a keen ocean swimmer and over the last 15 years have competed in swims around Sydney beaches. I have two adult sons who are starting to spread their wings and I have recently downsized and moved back to the beach where I grew up. My career has been in marketing and advertising, a sometimes stressful but always stimulating and fun career.

When and how did you first find out you had melanoma?

My back has a lot of moles on it but I never had regular skin checks. When heard of an acquaintance having a close call with one of their moles I took myself off to a dermatologist for a skin check. On that first visit she found something she was concerned about on my back. It turned out to be Melanoma. I had a wide excision and a sentinel node biopsy. Thankfully, the lymph nodes were clear.  That was 10 years ago. I went on to have all my required follow ups with three monthly skin checks for 5 years and then six monthly thereafter.

June 2018 I did a Pump class at the gym, something I’d been doing for about 6 weeks. I recall thinking that the instructor did a deadlift differently to what I was used to, but I followed her lead. Later that day I had pain in the middle of my back and put it down to having pulled something doing that deadlift. Throughout June and July the pain spread throughout my torso – I had back pain, shoulder pain, hip pain. It wasn’t consistent and the type of pain varied from dull aching pain to something like an electric shock travelling through my body.

I visited a GP after I had my gym injury and asked her to take blood tests (what type I wasn’t sure) as I was generally feeling off my game and a bit nauseous. She suggested the nausea could be from the anti-inflammatories I was taking for my injury. She said nothing was amiss with my bloods so I looked into other solutions. I visited a chiropractor about 6 times and saw a Bowen Therapist (I’d never even heard of this prior). I was still trying to stay active and would swim laps at the pool when I could, but that became increasingly difficult.

By the end of July I was experiencing incredible pain! I decided to go to another GP and based on my symptoms, she felt it could be an autoimmune disease so prescribed me steroids and sent me to an Endocrinologist. I was lucky to get an appointment in the next couple of days, he listened to my story and suggested I get a bone scan. He also advised me to stop taking the steroids as they hadn’t provided any relief from the pain.

At this point I had a week off work and was planning to drive up the coast to visit a girlfriend. The Dr said the scan results wouldn’t be available for a few days so I had the scan done in the morning and then headed off on the 3 hour drive up the coast in considerable pain. Early that evening I saw that I had a message from the Dr asking me to call him. That was the first moment that I became concerned. I rang him back and he just kept saying to me “I’m sorry, I’m sorry, I’m sorry” I had to ask him what are you telling me? That’s when he said you’ve got cancer and it’s all over your ribs, spine and pelvis.

At that point he told me not to hurry home, to have a few days away. Who was he kidding! I’m not going to be able to relax, I need to know what’s going on and what options I have. I went to bed and had a fitful sleep, got up and drove back to Sydney. The next day I met with the Dr and was shown the bone scan – my torso, my arms and my thighs were lit up like a Christmas tree. It was at this point that Melanoma was first raised but discounted as he suggested that it rarely presented going straight to the bones. He believed that it may be something in my blood.

The next step was to have a bone biopsy and see a Haematologist. On the 14 August  I met with the Haematologist who said simply ‘I’m sorry, it’s Melanoma’. He told me he couldn’t help me but said he would refer me to Melanoma Institute Australia (MIA) and Professor Georgina Long.

The next day I had my first appointment at MIA and they didn’t mince words. I sat there with my brother whilst they told me what I had wasn’t curable and that the historic prognosis of my diagnosis was 12-24mths. They also told me they had been having good results with new immunotherapy treatments. I turned to look at my stoic 6 foot 4 brother and he was in tears.

Tell us about your treatment

I was BRAF mutant positive, so I was started on Tafinlar/Mekinist – essentially to get a quick response to try and reduce my pain. Thankfully within 2 days I generally felt improved. After about 10 days the subsequent scan showed positive results, which was great for my mental wellbeing. But from the outset Prof Long said that I would need to have the immunotherapy combination Ipilimumab/Nivolumab as it was the best chance given the Melanoma was in my bones.

I had 2 infusions of Ipi/Nivo before treatment was put on hold due to the side effects. The side effects I experienced included: swelling in the optic nerves, peripheral neuropathy, some weird hearing changes and colitis.

I had my first infusion on 11 Sep and the second one on 2 Oct. On the 19 Nov I received the results from the first scans taken following the infusions. Miraculously there was no active cancer. They told me I had a full metabolic response treatment. I have not had treatment since. I continue to have scans every three months and have just hit the two year mark of clear scans.

As a result of treatment I got vitiligo, which apparently is a good sign. Two years on it is continuing to spread across my body. They say that women in their 50’s become invisible, not when you have vitiligo, I’m getting all the stares!

What challenges did you and your family and/or friends face after your diagnosis?

Anyone will tell you that there are many challenges you face in a situation like this. Personally, my initial challenge was pain management, once I got that under control it was easier to cope with what I had to face. I meditated everyone morning and kept a regular routine which helped to bring some normality and I guess control to my life. Whenever I felt well enough I also went to the pool and swam as many laps as I was able to.

My biggest challenge however was that I just wasn’t ready to die. I wasn’t scared to die, I just didn’t want to leave the world behind. I decided that all the statistics the Dr’s gave me were just averages. The reality is that outcomes are spread along a bell curve. I decided I was going to be on the righthand end of that curve.

There are also the practical challenges of being unwell. How do you earn an income, how do you cook a meal when it hurts too much to bend down and get something out of the cupboard? My salary continuance insurance  kicked in after a period of time and took a load off my mind. My friends and family cooked and provided food parcels.

I took to Instagram to share my story and the poems I wrote explaining how I was feeling and what I was going through. What became evident was that people appreciated that I was keeping them informed about what was going on. It gave them a non-invasive way to have updates on my condition. It gave me an outlet for some creativity as well as opened up new connections and reinvigorated old ones.

My family and friends were understandably upset and emotional. My partner at the time had lost his first wife to cancer so I was very concerned about what he was going through.  Whilst he was extremely supportive throughout the process he did go through a stage where he distanced himself emotionally.

I was very honest with my sons from the beginning. I told them that what I had wasn’t curable and that the goal was to get the most time I could. They both seemed to take it in their stride.

I think because my journey was relatively short, 97 days from diagnosis to no active cancer, the impact on those around me was also short lived.

Tell us about your involvement with MPA

I only found out about MPA when I visited a psychologist to help me cope with the reality of facing death earlier than I had always expected. I made my first post to the MPA Facebook page the night before I was going to the Dr to receive what turned out to be my first clear results.

To be honest I felt really bad that I had joined and told my story one day and then was coming back the next day to say that I had no active cancer. I felt guilty. Nonetheless I posted my results on the page and got the most wonderfully warm and supportive responses. That was when I realised that my story can provide hope for others.

Ever since then I periodically review the latest posts on the Facebook page and provide support or my experience whenever it feels relevant. I’ll admit I sometimes find it hard to read some of the posts so I go through periods where I avoid the page. But I always come back as I’ll always be one of the gang now.

How has melanoma cancer affected your outlook on life?

I have had a couple of major things happen in my life over the past 2 years including my Melanoma diagnosis, as a result I have done a lot of personal reflection. I am more grateful for the simple things in life – a swim in the ocean, a smile from a familiar face, doing what pleases me rather than doing something I think is expected of me.

Due to Melanoma I have crush factors in two of my vertebrae. Lucky for me that I did that pump class as it seems the injury was a result of melanoma eating away at my spine. Who knows when I would have found out about it otherwise! I have been concerned about the fractures in my back and what they may prevent me from doing but as I’ve got my health and fitness back there seems to be little that I can’t do. I’ve even recently got back to bodysurfing!

One day when I was back at work in marketing I had the concept for an ad presented to me and it spoke about getting a holiday tan. At that very moment I knew that I couldn’t approve that ad. I realised that if I didn’t approve that ad and everyone in advertising and marketing like likewise, then we could have an impact on Australian’s relationship with the sun. Prior to COVID-19 I was making presentations at Advertising Agencies and at marketing departments telling my story and explaining how they can be a part of helping change the cultural norm around tanning.

Do you have a motto or personal mantra?

’m in flow with the ocean